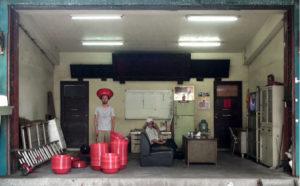 Tetsushi Higashino refers to himself as an Unproductive Production Activist, apparently his definition of an artist. His work makes visible the logic of this notion and the metaphorical visions often derive from things that subliminally intervene in our daily lives. They transform the ordinary world we overlook into one of extraordinary nonsense